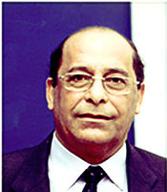 Dr. Osman Lotfy Elsayed received his B Sc. Degree in Electrical Engineering (Communications) from Cairo University in 1965 and the "Docteur Ingenieur" (Ph. D) degree  in Electronics and the "Doctorat d'Etat es Sciences Physiques" both from the University of Aix-Marseille I (France) in 1974 and 1977 respectively. He is a Professor with the Department of Electronics and Communication Engineering, Cairo University since 1987.

Dr. Elsayed was the co-founder of the National Telecommunication Institute (NTI) of which he was the first Deputy Director (1984-1994). He also directed the founding team of the "French University of Egypt" and acted as its President from 2008 to  2012. Moreover, aside from his membership in several research councils in the Academy of Scientific Research and Technology (Transport & Communications, Space & Remote Sensing, URSI, ICT), he was the first Chairman of the ICT Research Council (2002 – 2006). He also directed the "Development Research and Technology Planning Center" of Cairo University for more than 8 years (1997 – 2006) and  chaired the MTT-APS local Chapter of IEEE (1987 – 1994).

Apart from his academic and research activities, Dr. Elsayed occupied eminent positions in industry and government. As Chairman and CEO of the National Telecom Organization (presently Telecom Egypt) he introduced for the first time in Egypt the GSM mobile telecom and VSAT services (1996). He also founded the first public internet service provider company (Geganet) and initiated an intensive program for network digitization (Megaprojects) and for the deployment of optical fiber in the backbone network. During, his term as Chairman, the first steps towards telecom sector deregulation were undertaken, with the award of licenses for VSAT services and public cabin telephony for private companies.

Dr. Elsayed served on the board of several ICT companies (EGTI, Arab Sat, Nile Sat, NCN, ICN, EGID), organizations (National Railways Organization, ERTU, National Meteorological Organization) and institutes (Laser Institute -Niles, NTI, IFAO, DRTPC). He also served as a Senior Expert for the ITU on several projects and was Egypt's candidate for directing the ITU Arab Regional Bureau (1997). He was also a Senior Consultant for the Minister of Transport and the Minister of Education. Dr. Elsayed served as Cultural Counselor and Head of the Academic Mission in the Egyptian Embassy in Paris and represented Egypt in several meetings of the Francophone Organization and its agencies.

For his distinguished research and academic activities, Dr. Elsayed received the "State Encouragement Award (1984) from ASRT, the "Order of Merit – 1st class" from the President of the Republic (1995) and the medals of Chevalier and Officier des Palmes Academiques (1985 & 2007 respectively) from the French Government. He is a member of the Board of Directors of the National Telecommunication Regulatory Authority (NTRA) since 2001 and member of the Board of DRTPC since 1997.